Over lockdown, I rebuilt the Les Paul copy which I’d made back in college around 1976. Originally the neck was one piece mahogany through-the-body (Honduras mahogany no doubt) but it got smashed very soon after completion and had to be redone. The replacement was done in a rush and I was never happy with it. So with all the time on my hands during lockdown, I decided to cut off the old neck and start again.

The wood for the new neck, came from some old hardwood decking that was lying around our garden and I purchased a fingerboard made from treated Spanish eucalyptus which looks nice enough – it’s not rosewood and it lacks the gorgeous smell and workability of the real thing but no Orangutans were harmed. Replacing the original ebony fingerboard probably isn’t possible any more and I wouldn’t want to but I’m really happy with the finished result. I added some Seymour Duncan Seth Lover pickups which sound fantastic.

Next point to address was the intonation. The original bridge was never correctly positioned and I didn’t mount it at an angle which made it impossible to achieve perfect intonation with a standard Tune-O-Matic bridge. Moving the mounting would be a lot of trouble so I bought this replacement:

It’s a roller bridge with much wider adjustment and gave me enough leeway to get the intonation spot on. But there was a problem – all kinds of buzzing and odd ringing was going on. Playing one string would make the others vibrate loudly. Certain frequencies would have unwelcome overtones and it sounded like fret buzz. Damping the string between the bridge and tailpiece helped but not entirely.

Looking closely at the strings crossing the roller bridge, I realised there’s a very narrow point where it touches the strings and this does nothing to stop vibrations passing along the string to the tailpiece—and bouncing back! It’s very similar to playing harmonics but these harmonics are on a string that goes from nut to tailpiece – not nut to bridge! This can generate some very unwanted tones.

The standard Gibson Tune-O-Matic bridge holds the string in a very short groove which may be enough to prevent most of this effect. But look at the Paul Reed Smith designs; they do not have bevelled saddles so always have a much longer channel for the string to pass through. This longer channel clamps the string and effectively prevents any vibration passing over the bridge. 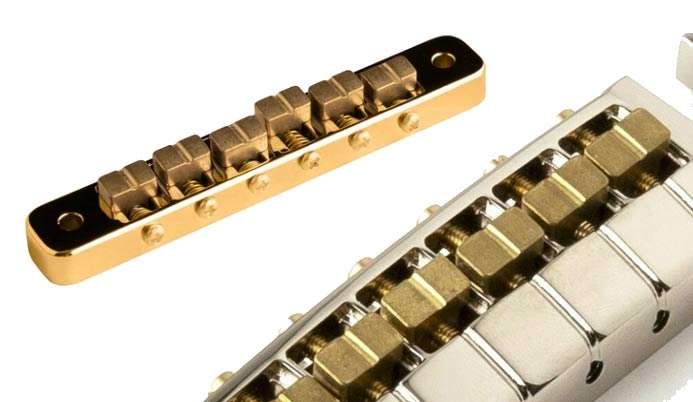 When I removed the roller saddles and made replacement bridge pieces out of brass it made an amazing difference to the sound of the guitar. What sounded like fret buzz and strange harmonics had been a result of what I think is a basic design flaw in Roller Saddle Bridges where they fail to hold the string at its proper length and allow harmonics to travel back and forth from tailpiece to nut. With PRS style saddles everything was more controlled and balanced without any of the previous ringing and colouration.